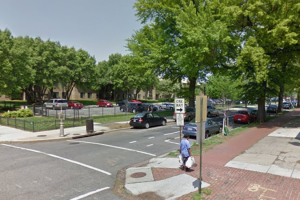 (Updated at 3:54 p.m.) Three thieves in ski masks robbed two men and a woman at gunpoint in Shaw last night, according to a police report we obtained today.

The robbery happened on the 1200 block of 5th St. NW just after 9 p.m. last night. That area is about a block east of the Walter E. Washington Convention Center.

The victims were waiting to gain access to a building when they were approached by three men, authorities said. One of the men pulled out a weapon that “appeared to be a black semi-automatic handgun,” according to the police report.

The robbers then stole cash, a wallet and two iPhones from the victims before fleeing, according to police.

Two robbers — one of whom had a knife — approached a man at a gas station on the 2600 block of 14th St. NW last night, according to police.

When the victim pulled his cell phone out of his pocket to call 911, one of the robbers snatched it, police said.

The suspects fled soon after.

Police are also on the lookout for a group of men connected to the assault of another man inside of a downtown nightclub last week.

The crime occurred at Eden Nightclub (1716 I St. NW) on May 21, according to police, who released a video of the alleged beating yesterday.

In the video, several men can be seen beating another man with their fists and with an object that appears to be a dustpan. Police said the beating left the victim with injuries that included facial swelling.