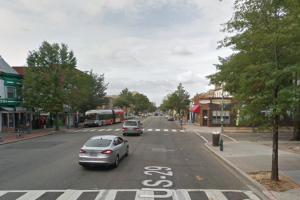 Three robbers hit a teenaged boy with a baseball bat and stole his bike during a “gang-related” robbery in Park View yesterday afternoon, police said.

The crime occurred on the 3600 block of Georgia Ave. NW around 3:45 p.m. yesterday, according to a police report we obtained. That area is nearby several restaurants and bars such as Alfie’s and Colony Club.

The teen was riding his bike when he was approached by three people, police said. One of the individuals hit the teen with a bat before all three pushed him off his bike, according to authorities. The thieves then took the teen’s mountain bike and swiped his baseball cap before running off, police said.

The suspects were last seen heading west on the 800 block of Otis Pl. NW. Police did not provide a description of the alleged thieves.

The teen sustained injuries to his right side, police said, and was taken to the hospital for treatment.