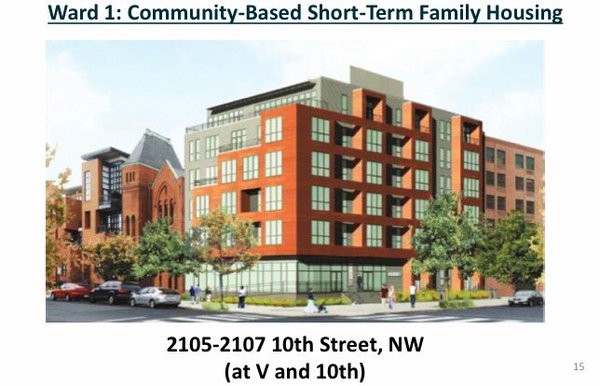 Community leaders with the ANC that covers parts of U Street, Shaw, Columbia Heights and LeDroit Park are urging the D.C. Board of Zoning Adjustment (BZA) to take a second look at a developer’s plan to build on a vacant lot at 10th and V streets NW.

The commission last night voted on a resolution to oppose a request from the project’s developer, Sorg Arhcitects, to extend several zoning variances the BZA first approved for a different project at the site in 2014.

According to the ANC, the current (and somewhat controversial) plan to build a transitional housing shelter on the site differs too much from the mixed-use development that Sorg proposed for the site years ago, and thus, needs to be examined as a separate project.

“This is a new use for this land. It needs to be treated in that way,” Commissioner Ellen Sullivan said. “As we have said from the beginning, this commission is supportive of having a family homeless shelter in this location… but we want it to be reviewed properly. We are going to have this as part of our community for decades.”

Furthermore, the ANC argues that Sorg isn’t eligible for the variance extension for a long list of reasons.

Commissioner Robb Hudson told Borderstan today that the reason for the commission’s opposition is to “make sure what is built is not something that’s cobbled together from other plans that don’t fit the new use.”

The ANC vowed in its resolution to hold many more public meetings and to treat the forthcoming shelter “like any other construction project.”