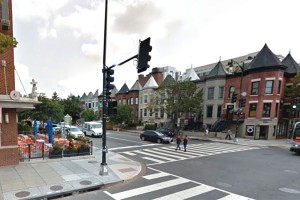 A gun-wielding thief robbed a man near the U Street corridor late last night, police said.

The armed robbery happened on the 2000 block of 13th Street NW about 11:45 p.m. Thursday. The area is just north of the west entrance to the U Street Metro station.

The victim was walking on the block when a man approached him, police said.

“Give me your sh-t,” the man told the victim, while flashing a handgun, according to authorities.

The victim then handed over iPhone and some of his other belongings. The man with the gun fled soon after.

Two thieves also robbed a man at gunpoint in Shaw last night, according to authorities.

The armed robbery occurred on the 1400 block of 5th Street NW about 9:30 p.m. Thursday. The area is just west of the Bundy athletic field and dog park.

The victim passed two men while walking on the block, police said. One of the men then pointed a handgun at the victim and ordered him to give up all of his belongings.

They took a wallet, backpack and two cellphones from the victim. But the men gave one of the phones back after the victim said it was issued by the government.

The duo fled soon after returning the phone.