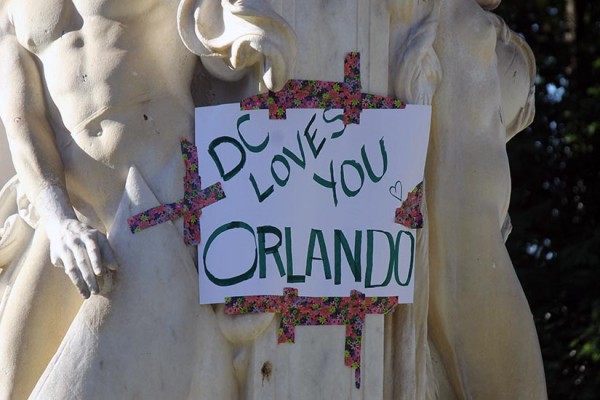 Pride Takes Somber Note After Mass Shooting in Orlando — The Capital Pride Festival, normally celebratory, took on a sadder tone than usual following the tragic mass shooting in Orlando Sunday morning. The festival included a moment of silence, hugging and hand-holding and a performance from the Gay Men’s Choir dedicated to the 50 people who died during the attack on the Pulse Nightclub in Orlando. “This morning, our hearts are heavy after hearing about the tragedy in Orlando,” D.C. Mayor Muriel Bowser said in a statement yesterday afternoon. “Just yesterday, we held the annual Capital Pride Parade, a celebration of the rich diversity and contributions of the LGBTQ community in the District of Columbia.” As the sun faded yesterday evening, locals lit candles and gathered to remember the victims during a vigil around Dupont Circle. [Washington Post]

Woman Sues After Howard University Roach Attack — An ex-Howard employee is suing the school over a wrongful termination caused in part by a roach attack. The staffer said a “giant” roach leapt into her eye in a school elevator in 2014. When the roach fell out of her eye, the staffer said its leg remained, slicing her cornea. The staffer claims she was wrongfully fired while on medical leave after the bug assault. [Washington City Paper]

Shaw Shooting Memorial Causes Controversy — Controversy is brewing over a memorial built to remember the victim of a 2015 shooting. Opponents say the memorial — built on the 600 block of O St. NW — makes Shaw look like a “cemetery.” But the mother of the shooting victim said she’s just trying to memorialize her daughter. [ABC 7]