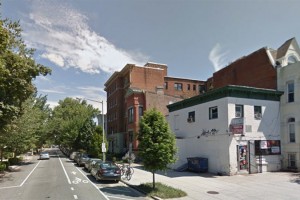 The victim was walking about two blocks southeast of the Logan Circle NW traffic circle when two men came up to him from behind and flashed handguns, police said.

“I need money,” one of the men told the victim, according to authorities.

The victim then threw out $40 from his pocket. But the men wanted a wallet, which the victim said he didn’t have.

The men walked toward a white or light-colored station wagon soon after. They weren’t done with the victim, however.

The robbers turned around half of the way to the vehicle and fired shots at the victim.

The victim only received small cuts to his arm during the encounter. But it wasn’t clear how he got them.

Bullets struck a nearby BMW and shattered the glass for the front door to an apartment building on the block before ricocheting down a hallway.

Thieves with guns also robbed a man and a woman in Shaw early this morning, according to authorities.

The victims were walking away from All Souls at 725 T St. NW when they noticed someone was following them, police said. They turned around soon after, finding two men with handguns behind them.

The woman then threw her purse at the men and ran away, leaving the other victim behind. One of the man chased after her, but fled when the woman said she didn’t have anything else.

The other victim didn’t run, however. He gave his cellphone and “man purse” to the other man with a gun, according to authorities.

The two robbers eventually met up again and fled in a gray, four-door sedan.

A thief robbed a man at gunpoint in Adams Morgan early this morning, too, according to authorities.

The armed robbery happened on the 1700 block of Columbia Road NW about 4:30 a.m.

The victim was walking home with someone just northeast of the Adams Morgan Safeway when a man came out of an alley, demanding his bag, police said.

The man then pulled out a handgun, causing the victim’s companion to run away. The victim threw his bag to the ground soon after and gave the man $25.

The man with the gun then fled.