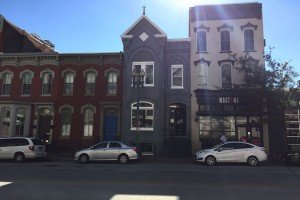 An Italian restaurant is getting closer to reopening in Shaw after leaving Georgetown four years ago.

Fino, which closed in Georgetown in 2012, now has a liquor license application for its forthcoming location at 1230 9th St. NW on file with the D.C. Alcoholic Beverage Regulation Administration, according to a notice the agency published yesterday.

Owner Seyed Beheshtian told Borderstan that the reincarnated Fino will have pasta, wine and other Italian staples that are similar to what it served at 3011 M St. NW after it opened in 1988. The new space is slated to hold 75 people.

Beheshtian said he expects Fino to start welcoming customers later this year in the lower level of the 9th Street building. The upper floors are set to house a restaurant called 1230 from chef and former Food Network “Chopped” contestant Malik Fall.

A crew is “working on construction right now” for Fino, Beheshtian said.