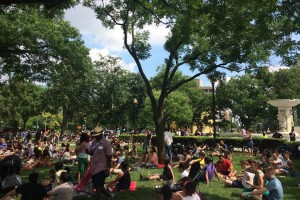 Musicians are set to descend on Dupont Circle next Tuesday to help celebrate an annual French holiday.

D.C.’s installment of the annual Fete de la Musique will occur in Dupont Circle park next Tuesday between 3:00 and 8 p.m., according to organizers.

The lineup for the free festival includes bands playing jazz music, music for kids and “international hits.” The event will also include French games like pétanque and other outdoor activities.

The event, organized by Alliance Française and Dupont Festival, coincides with the worldwide holiday that first began in Paris in 1982. This is the second year the two organizations have collaborated on a District version of the festival, said Aaron DeNu, president of Dupont Festival.

“This type of project fits perfectly with our continuing series of collaborations with diplomatic missions to program activities in Dupont Circle Park,” DeNu added.

Though the event won’t be cancelled if Alliance fails to hit its fundraising goal, Avner said the organization might have to cut back on events later this year if that happens.

“It’s one of our main events,” Avner said.”It brings people together. We need that more than ever.”