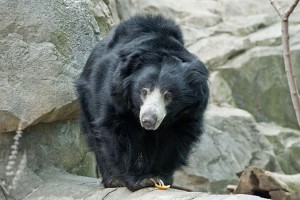 The National Zoo euthanized one of its sloth bears yesterday, according to zoo officials.

The “geriatric” bear named Francois developed a severe case of degenerative disc disease in his spine last year, according to a zoo press release.

“Francois’ condition deteriorated further over the last several days, and the decision was made to humanely euthanize Francois,” officials said.

Sloth bears usually live to be about 16 years old, officials noted. Francois, who was 25 when he died, beat the average by almost nine years.

The zoo’s other sloth bears, Hana, Hank and Remi, can be seen at the Zoo’s Asia Trail exhibit.

Animal care staff had kept a close watch on Francois after Zoo veterinarians examined the geriatric bear in December 2015 for a worsening of severe degenerative disc disease in his spine. To keep him comfortable, vets administered anti-inflammatories and nerve-pain medications, and animal care staff made adjustments to Francois’ husbandry routine and enclosures to accommodate his needs. Keepers mulched the floor of his indoor enclosures to give him more traction and trained him to participate in voluntary blood draws to monitor the effects of his medications. Keepers also checked his blood pressure weekly; the Zoo recently posted a video about training Francois to participate in blood-pressure measurement. While improvement was noted following administration of these new medical treatments five months ago, a marked decline in their effectiveness was noted over the last several weeks. Francois’ condition deteriorated further over the last several days, and the decision was made to humanely euthanize Francois.

Born at the National Zoo in 1991, Francois seemed to enjoy interacting with visitors and basking in the sun. Most Zoo animals participate in a breeding program called the Species Survival Plan (SSP). The SSP scientists determine which animals to breed by considering their genetic makeup, nutritional and social needs, temperament and overall health. From 2003 to 2010, Francois lived at the Little Rock Zoo in Arkansas where he sired four cubs. He returned to the National Zoo in 2010 when the SSP recommended that Francois breed with the Zoo’s female sloth bear Hana. Their cub, a male named Hank, was born Dec. 19, 2012. The following year, Francois bred with another female, Khali, and sired three cubs born Dec. 29, 2013. Only one cub from that litter–a female named Remi–survived and was hand-raised by keepers.

As Remi matured, keepers gradually increased the time Francois and Remi spent together, and they cohabitated for the past year-and-a-half. Normally, male sloth bears do not have any role in raising their offspring. However, due to Francois’ sensitive and social nature, he not only showed interested in Remi when she was still being hand-raised, but readily became her companion and helped teach her how to be a bear. It was important for Remi’s social and behavioral development that she spend quality time with members of her own species. Keepers described Francois’ overall disposition as genteel, and his interactions with the Zoo’s other female sloth bears were playful and positive.

Sloth bears are not related to sloths but were given that moniker by English settlers who named them due to their dark, shaggy coat and long claws. A gap in the bears’ teeth enables them to suck up ants, termites and other insects. Native to India, Sri Lanka and Nepal, sloth bears are considered vulnerable to extinction by the International Union for Conservation of Nature. Fewer than 20,000 remain in these countries due to habitat destruction and increased agricultural activity.