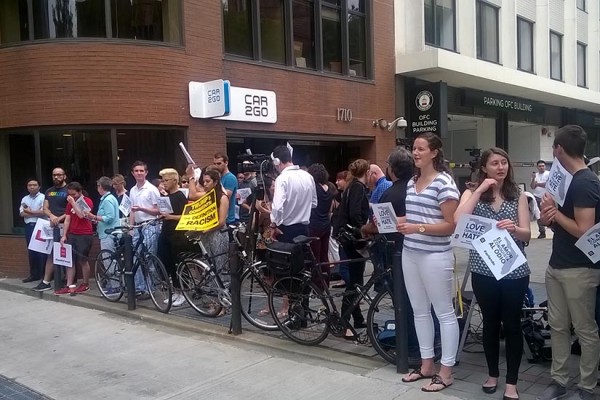 (Updated at 4:31 p.m.) Dozens of protesters gathered near the southern boundary of Dupont today to greet Donald Trump.

The protesters, many of whom came from the nearby Human Rights Campaign headquarters, stood on the corner of 17th and M streets NW and held signs that read “love conquers hate” and “Trump’s comments: the definition of racism.”

The Republican presidential nominee is visiting a law firm’s office today to be deposed in his legal dispute over a planned restaurant in his forthcoming hotel at the Old Post Office.

Trump reportedly avoided clashing with protestors on his way into the building by using a side entrance.

Protestors still waiting for #Trump to show up for his deposition in Washington DC this morning. #LoveTrumpsHate pic.twitter.com/5dybsdL864

Protesters outside firm where Trump is expected to show up for deposition pic.twitter.com/1SdSexNQMS

We’re monitoring the protests and will update this post if our reporter spots The Donald.