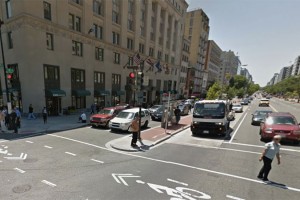 A cyclist hit a Maryland man in the face with a bicycle lock in a spurt of road rage downtown yesterday afternoon, police said.

The assault occurred on the 1500 block of K Street NW about 3 p.m. Thursday.

The victim was driving his car in an access lane on the road just west of McPherson Square when a man on a bicycle began to yell at him, according to authorities. The cyclist then rode in front of the car, got off his bike, grabbed his bike lock and walked toward the driver as he sat in his vehicle.

“Now we’re going to have a problem,” the cyclist said, according to authorities.

The cyclist then whacked the victim with the lock, got back on his bike and pedaled away.