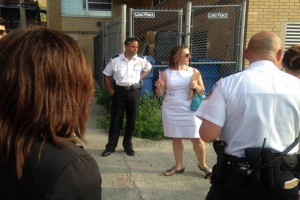 The Councilmember penned a statement to her constituents yesterday addressing several violent crimes in the area, including the shooting death of a man on 14th Street and a separate shooting nearby that injured two men later that day. Nadeau also addressed the recent incident where a police officer was assaulted at the Columbia Heights Metro.

“I know many Ward 1 residents are concerned about these incidents, whether you live, work, visit or commute through Columbia Heights,” Nadeau wrote. “As a resident of Columbia Heights on 14th Street myself, I understand how upsetting this is.”

Nadeau continued: “Much of what we’ve seen in recent years in DC is basic disagreements that turn deadly because of guns,” she said. “Something as minor as one person accidentally bumping into the other gets violent. One of them has a gun. The other ends up dead. These are the things that keep me up at night.”

This has been a difficult week both nationally and in Ward 1. Our hearts go out to the victims of the Orlando shooting, whose lives were tragically cut short by gun violence targeting the LGBT and Latino community. Closer to home, on Tuesday there were two separate violent incidents involving guns, just blocks apart on 14th Street – one young man killed in the 2900 block of 14th St and two young men shot at Girard and 14th. Yesterday, MPD also responded to a fight involving youth at 14th and Irving. I know many Ward 1 residents are concerned about these incidents, whether you live, work, visit or commute through Columbia Heights. As a resident of Columbia Heights on 14th Street myself, I understand how upsetting this is.

I wish I had the power to keep everyone in Ward 1 safe all the time. What I do have the power to do however, is keep pushing for more resources for our community, keep calling on our federal government to do more to keep our cities safe while we do all we can at the local level, and make sure my constituents know what I’m doing on their behalf.

Next week, MPD will be holding a community meeting about the recent incidents. Details are below.

When crime occurs in Ward 1, the Metropolitan Police Department is first on the scene, notifying me and providing me updates as more facts are known. This summer, in anticipation of the warmer months when we tend to see more crime across the country, I have also set up lists by neighborhood to notify those who have expressed interest in public safety in their area. I have been sending updates to those lists, so as not to bombard inboxes across the Ward. You can sign up here.

MPD also utilizes their own notification system via their Yahoo groups (MPD 3rd District and MPD 4th District. Find your Police District here.), which includes all crimes, not just the more serious ones. These lists are an excellent way to stay informed and engaged with MPD as they reply to inquiries directly on those lists. Once the location and our residents are out of danger, MPD looks to the community to share any information they may have observed or obtained about the incident or events leading up to the incident. This partnership is essential, and in fact has been instrumental in closing many cases this year. If you have any information about the incidents on 14th St, please call (202) 727-9099 or submit anonymous information to the department’s TEXT TIP LINE by text messaging 50411.

I want you to know that I work daily with MPD and in collaboration with our ANCs to ensure they have the resources to keep our residents safe. In the Council’s recently passed budget I supported increased funding for MPD to add 60 new officers and continue moving forward with the body camera rollout. In Columbia Heights, we have more officers than anywhere else in the Ward.

In the budget I also supported more funding for youth programs year-round including enhanced funding for programs to support at-risk youth and youth involved with the justice system, and later this month I’m bringing together all of our youth serving organizations to address gang violence in our community. I voted for a rebate program for private security cameras that can be used in MPD investigations, and I supported programs to help returning citizens become productive members of society after serving their time instead of sliding back into crime.

In anticipation of the crime spikes that most major cities see in warmer months I held a public safety meeting for my constituents in April. Chief Lanier came with her team, and more than 70 residents sat with their local officers to discuss strategies for addressing persistent crime. I believe this is the type of collaboration that helps resolve crime in neighborhoods. But it won’t end the late night police calls when we know illegal guns are finding their way into our city.

Much of what we’ve seen in recent years in DC is basic disagreements that turn deadly because of guns. Something as minor as one person accidentally bumping into the other gets violent. One of them has a gun. The other ends up dead. These are the things that keep me up at night.

We need these guns off the street. Period. Last year the DC Metropolitan Police Department recovered 1,609 weapons. The year before that, they recovered 2,178. This week, with the help of a neighbor who called 911, police got a gun off the street in the Georgia Avenue area. They are doing incredible work in this area, but we also need Congressional action. Today, I wrote an op-ed in the Washington Post that talks more about how badly we need Congress to act to prevent gun violence, and I hope you’ll take a look at it and share it with others.

Everyone in our community plays a role in addressing public safety issues, calling 911 when you see something suspicious or illegal, sharing information with your local Police Service Area lieutenant that might be helpful in solving crime, even attending the monthly PSA meeting. That’s a great place to hear from MPD directly about what they are doing in your area, crime stats, etc.

The Third Police District’s PSA 304 and 302, where the recent Columbia Heights incidents took place, will be holding a community meeting on Tues., June 21, at 7pm, at the Third District Station, 1620 V St. They will be discussing some of their strategies to address the recent spike in crime in the area of 14th Street, and the adjoining PSAs. If you’re unable to make the meeting you can reach out to PSA 304 Lieutenant John Hedgecock at [email protected] or(202) 277-3109 or PSA 302 Lieutenant Mark Hodge at [email protected] or (202) 489-8338.

I have two upcoming Brianne on Your Block community office hours where you can drop by and talk with me about whatever issues are on your mind:

And I can always be reached at [email protected] if you have any additional questions or concerns.