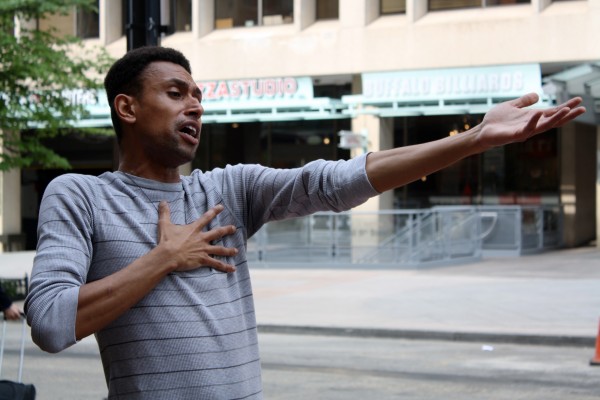 You’ll probably hear him before you see him.

One or two days a week, someone with an angelic voice sings “Ave Maria” and other classics at the Dupont Circle Metro station’s south entrance.

A typical encounter goes like this: First, you hear the heavenly singing. As you ride the steep escalator up, the voice intensifies and echoes. Then you see the source of the singing: a tall, thin man with a multicolored shawl and an orange Home Depot bucket. This is Hisham Breedlove.

“I feel that I am a gift to people, and people are gifts to me,” said Breedlove.

For more than a decade, Breedlove, 33, has honed his craft by singing in his falsetto tone at Metro stations throughout the District. At this point, after singing across town for more than a decade, he’s practically a local celebrity. And yet, some commuters seem continually surprised to see him.

Breedlove’s busking career was inspired by an encounter he had in 2004. One day, he came across a young woman singing at the Friendship Heights Metro station.

“She was doing exactly what I do now,” Breedlove, who was working at the Cheesecake Factory at the time, recalls. “I sat there for like 10 minutes and I enjoyed seeing people really appreciate her.”

On his next day off, Breedlove tried to emulate her at another Metro station. It was an “amazing” experience, he said.

“I took my little bag, went up to my job and quit [my job at Cheesecake Factory],” Breedlove said. “That was that.”

Breedlove, of course, is professionally trained. When he was 13, he enrolled in a vocal school in South Africa. Shortly thereafter, he moved back to his native Zimbabwe and began training with a vocal coach.

“My family is very big on education, so that has been my primary focus,” said Breedlove, who has an undergraduate from Washington Adventist University and a master’s degree from Morgan State University in Baltimore.

Though he loves to sing in public, busking does take its toll, Breedlove said.

For Breedlove, it’s about more than money. It’s about the people he greets every day.

“I just get such a warm welcome here and  I love seeing the expressions on people’s faces,” Breedlove said.

But Breedlove also has dreams. Each day he lays out his shawl and bucket, he hopes to get that big break.

“Somehow, I haven’t been recognized yet,” he said. “I thought that by singing on the Metro I would one day run into a guy who was a producer, or knows a producer.”

“I’m getting a little out there, so I would like something a little more secure and stable, which seems to be like trying to draw blood from a stone,” Breedlove added. “But I know that something will turn up.”