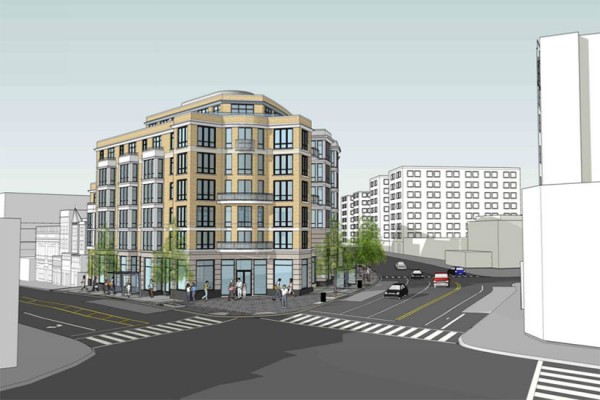 Members of the District’s Historic Preservation Review Board have voiced their dissatisfaction with a developer’s proposal to construct a mixed-use building with a pedestrian plaza in the heart of Adams Morgan.

The officials said at a meeting today that PN Hoffman’s updated redevelopment plan for the SunTrust property at 1800 Columbia Road NW has problems with aesthetic and size, echoing concerns from within the Adams Morgan community.

“The facade is too disjointed, especially along the south,” HPRB member Graham Davidson said. “The 18th Street side is truly a problem, and the building is still far too big in comparison to the other buildings along the street.”

Board members advised developers to downsize the windows, change the building’s look from modern to “masonry” to complement the surrounding buildings, make the plaza area more inviting and include signage commemorating the history and significance of the property, which once was the home of the Knickerbocker and Ambassador theaters.

Eric Colbert with architecture firm Eric Colbert and Associates, a partner on the project, stressed that the area’s history was taken heavily into consideration and researched before any new plans were created.

“We listened to many stakeholders in the community to modify and sculpt this building,” he said. “We tried to give it detailed elements that would pay respect to the historic district.”

HPRB’s members decided not to vote today on whether to support PN Hoffman’s proposal at the meeting. But the panel is expected vote on the developer’s plan as early as next month, after the developer makes modifications.

The board must sign off on the developer’s proposal for the property before construction can begin.

“Substantial revisions need to be made before this concept can be approved,” Davidson said.