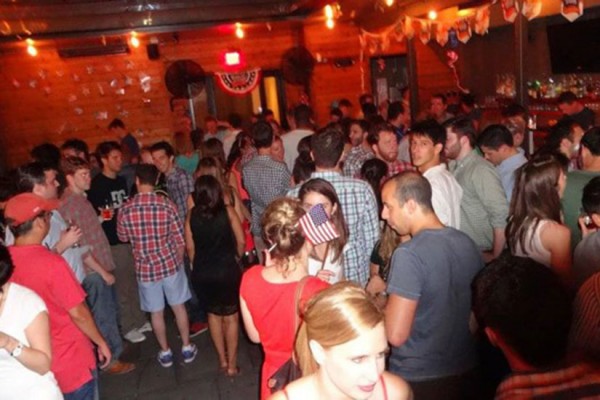 Who says the Fourth of July needs to revolve around fireworks?

Several bars, restaurants and other places around town plan to throw patriotic parties to celebrate the birth of the United States of America this weekend.

Here are more than a dozen ways to wish America a happy birthday:

BBQ, Booze and Other Food

The Blaguard has partnered with Heritage Brewery for an early Independence Day party on Sunday. Its specials include five different Heritage drafts for $5, along with $5 Sway Woke shots. It also plans to serve BBQ dishes.

DGS will serve a Fourth of July brunch with pastrami, smoked salmon and Bullfrog bagels, according to the Dupont delicatessen. Customers need to RSVP to attend.

The Mexican restaurant is hosting a BBQ-style Independence Day, with food and drink specials, according to a press release. Its chefs are slated to serve hamburguesa tortas, ribs and elote and chicken, steak and maitake tacos.

The Dupont watering hole is slated to have an all-you-can-eat buffet of BBQ dishes, along with drink specials and a DJ for entertainment.

The Shaw bar is scheduled to celebrate Independence Day with ice-cold beer and an all-American BBQ, which includes a $20, 3-item special for customers at the door.

Mission is hosting a celebration with an open bar, a large patio, a DJ and bottomless guacamole and chips. Customers with VIP tickets receive five hours of an open bar; everyone else gets four hours.

An all-you-can-eat buffet and a DJ are all scheduled for this Fourth of July party. Tables are filling fast, according to Lincoln’s website. Interested diners can RSVP online.

This bar has happy hour specials that include $3 domestic bottled beer, $4 mixed rails drinks and $5 house wines, according to its website. The tavern also is hosting a brunch on Sunday from 12-3 p.m., according to its Facebook page.

Hawthorne is set to have $5 Bud Lights, Fireball shots and other drinks Friday through Sunday until midnight. The bar also is hosting a brunch Saturday and Sunday from 11:30 a.m. to 3 p.m. On Monday, Hawthorne is slated to have all-day specials and DJs.

Rosebar is set to have an open bar from 3-4 p.m. But after the open bar ends, customers must have reservations. Tables inside and on the roof will be available until 9 p.m.

At Flashy Sundays, locals can either grab a seat on the roof deck this Fourth of July or dance to music. It’s $10 to get in. Drink specials include $5 Fireball shots, $5 Stoli cosmos and $4 Coronas.

Locals who are at least 21 years old can join an Independence Day pool party Monday, with DJs and cocktails.

Jack Rose’s terrace is scheduled to open early Monday at 2 p.m. and serve $4 Flying Dog canned brews throughout the day. Locals can drink beer and eat half priced wings, fried chicken skins and pork belly skewers all while watching the fireworks from the terrace, according to a press release.

Can you eat a lot of cherry pie? Locals interested in eating a large amount of pie this weekend should email [email protected] to sign up for Madhatter’s pie eating contest.

This bar on U Street is hosting a hot dog eating contest, along with drink specials throughout all of Monday, according to its Facebook page.

Jas Funk from Rare Essence, Sugar Bear from EU and special guests Chi Ali and LaKindra from the Suttle Squad are set to perform at the theater’s Independence Day celebration early Monday morning. DJ Rico and DJ Amp C are hosting the event.

But if you want to catch the D.C. fireworks Monday, the Cardozo Education Campus (1200 Clifton St. NW) and Meridian Hill Park are popular choices for the 9:09 p.m. show, which is scheduled to last 17 1/2 minutes.

Get good photos of the fireworks? Send your photos to [email protected] or tweet them at us.