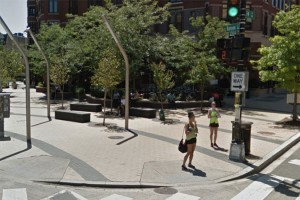 A robber with a gun beat a man in Columbia Heights yesterday morning, police said.

The violent armed robbery happened just outside The Heights on the 1300 block of Kenyon Street NW about 9:30 a.m. Monday.

The victim was sitting in the area when a man came up to him, according to authorities. The new arrival grabbed the victim by his shirt soon after and punched him in the face, knocking the man to the ground. The attacker then revealed a handgun that was tucked into his pants.

“Gimme the money,” the man with the gun said, according to police.

The gun-toting man then looked through the victim’s pockets, but didn’t get anything. The victim eventually got up and tried to fight off the man.

He wasn’t successful, however.

The man with the gun punched the victim several times in the face, knocking him down again. The attacker then grabbed the victim’s backpack and went through the pockets of another man, who was sitting nearby.

After he couldn’t find anything in that man’s pockets either, the thief walked away.

The man whom the robber assaulted was hospitalized with a large cut on his lip.