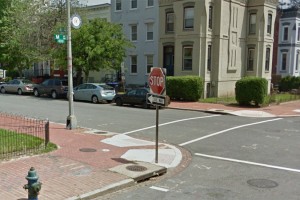 Drivers soon will have to do a better job at pumping their brakes at a Shaw stop sign if they want to avoid a ticket.

A new stop sign camera is “coming soon” to the corner of 4th and M streets NW, ANC 6E commissioner Rachelle Nigro wrote in a post on her Facebook page last night. But it wasn’t immediately clear when.

Police went out to survey the site and found that most drivers rolled the stop before making a right turn.

The corner, about three blocks east of the Walter E. Washington Convention Center, frequently is used by drivers and pedestrians. The camera is meant to catch drivers who do not make a full stop when approaching the intersection.

After the cameras are installed, police will issue warning tickets for drivers’ first violation.

FYI–The Stop Sign Camera will be coming soon to the corner of 4th and M St.! The camera will catch the drivers who do not stop at the sign and a ticket will be issued. MPD came to the site and it did not take long to notice that most drivers did not stop when a right turn was made. After the camera is installed warning tickets will be issued first. MPD will also put out a press release. So remember –always stop at the white line and do not roll through.