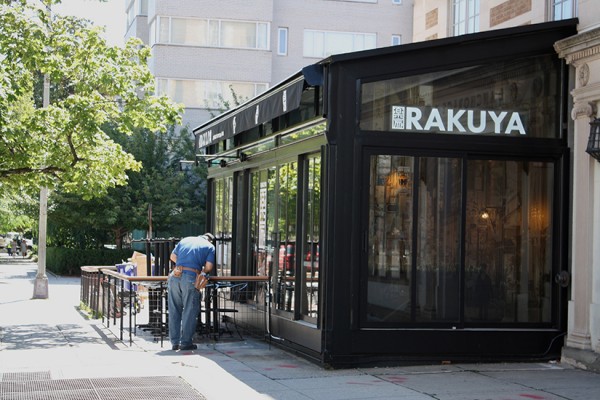 A Japanese restaurant in Dupont Circle is looking to reopen with a new look and a new menu next month, according to one of its owners.

Rakuya — formerly known as the sushi joint, Raku — could open its doors at 1900 Q St. NW as early as mid to late July, said partner Marcel The. Signs for the new eatery went up about three weeks ago.

“We are very, very close,” The said. “The construction portion of it is on its last week. We’re gearing up for final inspections.”

When the restaurant reopens, diners can expect a menu that includes “sushi, skewers, some Japanese small dishes, braised meats and ramen,” The said. Rakuya will also serve sake and shochu, he added.

“The menu is still in the works,” The explained. “We’re going to start out dinner only, then progress into lunch.”

“We had plans to do a Japanese concept somewhere for a long time,” The said. “When we decided to finally stay and renegotiated the lease, we realized that this Dupont space is actually a perfect location and size for us to do this Japanese concept.”

more stories
Previous
Here’s How to Ride Like a Ghostbuster Later This Week
Next
Japanese Embassy to Bring Origami, Games to ‘Farragut Fridays’