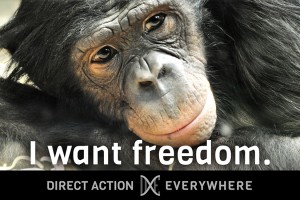 Nearly a dozen people say they plan to gather outside the National Zoo this weekend to speak out against animal captivity.

Members of the animal rights organization Direct Action Everywhere will peacefully voice their opinions on caged animals in the zoo this Sunday at 1 p.m.

“Zoos are like prisons,” said protest organizer Barbara Glick. “We don’t believe in these. We’re just trying to speak up about how animals suffer, whether it’s for entertainment, food, or clothing.”

Direct Action Everywhere is an international animal rights organization that calls for total animal liberation. The protest, Glick said, is meant to raise awareness over the “unnatural” conditions in which the animals are kept, and to call zookeepers out on their “hypocrisy.”

“Zoos don’t allow for natural behavior. They can’t mate naturally, get food naturally, they’re killing families,” said Glick. “The ironic part is how people talk about how much they love animals, but then walk around the zoo eating a hamburger.”

After the demonstration, the group plans to head to National Harbor to protest animals in circuses.

more stories
Previous
Borderstan Brief
Next
Coffee Shop Near U St. Closes During Roof Repairs, But Will Reopen