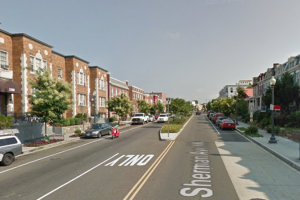 A man in the Columbia Heights area broke a hole through an apartment door and waved a machete at someone inside over the weekend, police said.

The crime, which authorities classified as a burglary, happened on the 3300 block of Sherman Avenue NW about 1:30 a.m. Saturday. The area is about three blocks east of the DC USA retail development.

The man with the machete first knocked on the door and yelled for somebody to let him in, police said. He was looking for a girl he thought was there.

He then punched a “fairly large” hole in the door with a hammer, according to authorities. The man next grabbed his machete and thrust it through the cavity while threatening to kill a man who was at the door, if he didn’t open it.

The victim opened the door soon after. The man then handed his machete to another man outside of the apartment.

Once inside, the intruder searched for the girl, but didn’t appear to find her. The victim’s wife was inside with two young children. However, neither she nor one of her children seemed to be the person he wanted.

Another person in the home eventually got the intruder out of the apartment.

Police are still looking for the man who broke through the door. The man is described as “Hispanic, possibly from El Salvador, 27-28 years old, 5’7”-5’9”, 190 lbs., light complexion, [last seen wearing a] black baseball cap, red tee shirt and blue jeans.”

Police are also on the lookout for two possible accomplices. One of the accomplices is described as “a Hispanic male, 20-30 years old, short in height, medium build, [last seen wearing] a white shirt.”