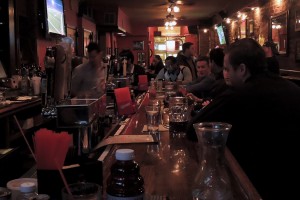 Locals will be able to toast the pornography industry during a tongue-in-cheek event in Adams Morgan tomorrow night.

The happy hour will include food specials such as the aptly named Kim Kardashian burger, which wedges two beef patties between “you-have-to-be-kidding buns.”

The event will also include beer and giveaways of nylon panties, Bowman said.

Black Squirrel owner Amy Bowman said the idea first came about during a conversation about the names of different craft beers.

“I was talking to some women in the hospitality industry and we started talking about some of the ridiculous names that beers have,” Bowman said. “It’s clearly misogynistic and they’re named by men who didn’t get laid in high school.”

The event will showcase some of the worst offenders, such as Burley Oak’s “Just the Tip,” Elysian’s “Men’s Room Red” and Sixpoint’s “Sweet Action.”

“I thought maybe we could have some fun with this and just make fun of them,” Bowman said.