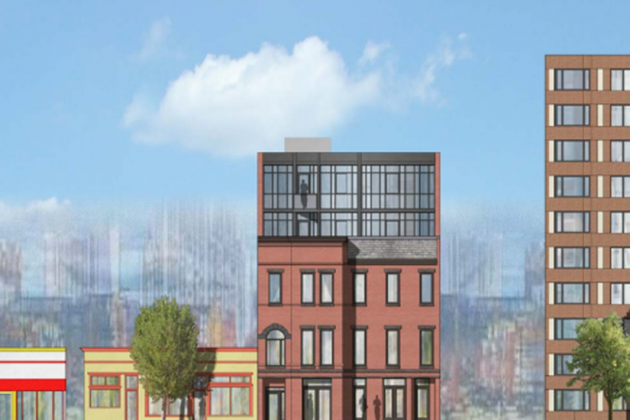 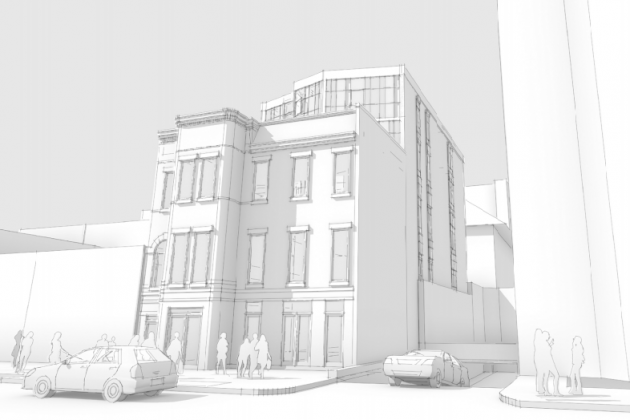 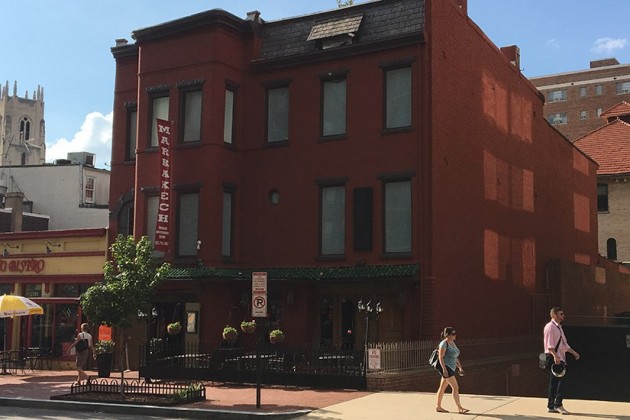 A compromise on a controversial plan to redevelop a building along P Street NW seems in the works.

Neighbors gathered last night for a special meeting of Dupont Circle’s ANC 2B to share concerns and ask questions about a plan to turn a building at 2147-2149 P St. NW into a mixed-use development with apartments and space for a shop or restaurant.

Developer Valor in April filed plans with D.C.’s Board of Zoning Adjustment (BZA) to add two floors to the building to make way for eight residential units and space for a ground-floor restaurant. The property currently houses Moroccan eatery Marrakech and its nightclub, Aura Lounge.

The developer has asked the BZA for a zoning variance that would allow it to move forward with its plans. The project must also gain the blessing of D.C.’s Historic Preservation Review Board (HPRB).

Neighbors who live in nearby condominiums and apartments are resistant to the idea as planned.

“The developer’s plan would accommodate many more additional residents that the neighborhood could reasonably handle and worsen its existing noise, parking, delivery and waste management problems,” wrote one Dupont resident in an email to the BZA last month.

Another local who lives in the Dupont West condominium wrote in an email that “the new development would completely block the present view of Rock Creek and Georgetown as well as cutting off the light source for these units.”

“We would be permanently harmed by this addition because approval of the variances would set a precedent for future such projects,” the resident added.

Many locals in attendance at last night’s meeting agreed that the planned building and restaurant would be, in essence, too tall and might infringe upon surrounding historic buildings. Furthermore, residents worried a new restaurant could create fumes and noise.

After nearly an hour of discussion and debate, commissioner Noah Smith floated an idea: Does the new development need a restaurant? Can the development be smaller?

Representatives for Valor — including the company’s founder, Joe Bous — seemed receptive to that idea.

“We’re open to anything,” Bous said. “We are really excited about being able to talk about clear opportunities for retail rather than a restaurant.”

Additionally, many of the ANC’s commissioners said that a new development is better than the current situation.

“I’ve spent the last four years hearing about how terrible Marrakech is,” Smith said. “And now we have an opportunity to put something here that is … a public good.”

Commissioner John Kupcinski echoed the sentiment regarding the P Street restaurant and bar.

“Marrakech, I’m sorry, it sucks,” Kupcinski said. “It is a blight on the neighborhood. It’s dangerous at night. I’ve seen the police reports.”

“You have a developer who is proposing different options to provide some sort of betterment there,” Kupcinski added. “There needs to be some sort of middle ground.”

Commissioner Mike Silverstein said he thought it would be a “gamble” to oppose the project.

“The city is littered with cases where we had turned things down, felt really good about it, and it ended up being worse,” Silverstein said. “You always roll the dice. When you say no to something and you don’t compromise, it sort of becomes an all or nothing thing.”

Ultimately, the neighborhood commission and developer Valor struck a deal to ask the BZA to push its consideration of the plan down the road by two months.

Despite the calls for a compromise, there remains a snag in the project: Marrakech owner Salim Elalami, who has the option soon to extend his restaurant’s lease. And Elalami told Borderstan he does not intend to close his restaurant any time soon.

more stories
Previous
Inside Real Estate With Kevin: Where to Buy a House in D.C.
Next
Dupont Protesters Demand Action After Police-Involved Deaths