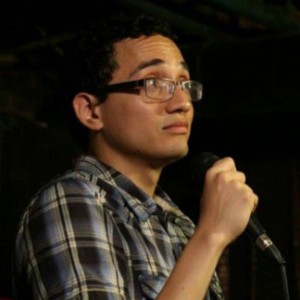 I’ve met Ahmed Vallejos a couple of times, but one of the first was at a show he was running at the Handsome Cock on U Street. It was called the Switcheroo, where the first half of the show involved comics performing their own stand-up and for the second half of the show, each comic had to imitate the styles of famous comedians. I thought that was such a good idea and he plays a huge part in developing and putting on shows with a unique premise, adding to the increasingly abundant local stand-up scene.

We chatted about a few things, including some of the shows he’s currently working on.

Borderstan: Haha, I feel like when it starts recording, I need to ask something right then and there, like I need to start with this amazing question and I never have one. So, I start freaking out, too. Believe me.

Well, I’m glad we can switch this up and have the interview start with me freaking out.

Yeah, we’re both freaking out.

It’s a nice way to keep yourself alive and energized.

To constantly be sad?

To constantly be worried about what you’re doing and how it’s coming across. I have that too, a lot of self-doubt.

Kind of, I feel like self-doubt and awkwardness has gone straight through the roof, and that’s stock you want to buy in these days.

Yeah, and it’s so odd because it’s not like that being the case makes it any easier to have self-doubt.

At best, when I say, “I’m awkward,” and someone else says, “I’m awkward, too,” it’s like okay, cool, now we’re just both awkward. We don’t really have anything in common. It’s not like we can just talk about awkwardness. It’s not like when you meet someone and they’re like, “Oh, I also like Million Dollar Baby,” because then at least you can talk about Million Dollar Baby. That might branch out to an actual conversation. There’s no segue from emotion.

No, you have to remember things that people talk about and conversation starters.

Remembering things is the hardest. I find myself forgetting so many things, and it’s worse because you care about them. In your brain, when you first hear about it, it’s like you’ll care about this; you’ll remember this. But sometimes, you just don’t. And that makes you feel worse because then you remember when it’s too late. One friend will tell you something and then you don’t talk to your friend about that for a week. And then the next time you see them, there’s a third party and they ask about the thing and you’re like f–k, I did care about that thing, but now I just seem like a clinger.

Yeah, but at least you have that third friend to help remind you.

The third friend is always great. Always – it does help, but it doesn’t help your status. Because people want to be known as someone that cares and [forgetting] takes you down a level. It’s worse when that gets paired with not noticing things. If you’ve ever been in a situation where that happens and another fourth, fifth party comes along and says “nice haircut” to one of the people you’re with, you’re like I didn’t notice this person’s haircut? I forgot my friend’s thing, I didn’t notice this haircut, oh, new shoes? I’m supposed to look at your shoes now? When you find a genuinely good person that everyone wants to be like, it’s just so hard, because you think they can do that, why can’t I do that? But sometimes, you just can’t do that, it’s not who you are. That person has been that way forever; you’d be starting from scratch. That’s going to take years.

The show we have tonight is “Virgin Material,” where an idea gets projected onto a screen behind the comic and the comic has to tell a joke about whatever’s on the screen. Every Wednesday night – here, on the second floor of Rendezvous Lounge, a.k.a. Dr. Clock’s Nowhere Bar — Alyssa Cowan and I have started a room. The standup scene here is so big and so amazing. And there are so many options you can do here. I can’t get enough of how much I love this scene. Alyssa had this great idea of finding a room where we could have weird shows all the time. And that’s what this has become, where if a comedian has a weird idea, we have it here. And we have a lot of fun. We have a spelling bee [coming up] where a team of drunk people and a team of high people see who’s better at spelling. It’s a small space, so a five-member audience will make it a fantastic show. Everything about this space is incredible.

Love that. How do you look up what the shows are?

It’s part of Laugh Owens Laugh, which is a Facebook page.

Cool, I love shows that are a little off-the-beaten path, too.

Yeah, comedians just like to do something that pushes them out of their boundaries. For me, it’s nice to be able to have an outlet like this even as a show runner. Because I run “Don’t Block the Box” and that’s monthly. I’ve been running it for over six years now. It’s the longest-running standup comedy show in D.C., which is something that I’m incredibly proud of. It’s at the Wonderland Ballroom on the last Friday of every month. But starting in September, it’s going to be the third Friday of every month. I love being able to showcase the scene; this scene means everything to me. I can’t even describe how funny people are here.

Be sure to check the Laugh Owens Laugh and Don’t Block the Box Facebook pages for information on the shows mentioned in the Q&A. Ahmed also performs stand-up at various venues around town, including The Big Hunt in Dupont Circle and others.