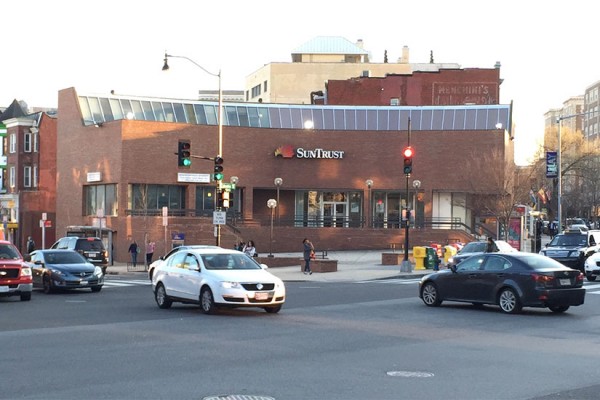 Locals are meeting at the SunTrust plaza in Adams Morgan this weekend as part of a campaign to “save” the site for the community, according to an organizer.

Adams Morgan residents with the “Save Our Plaza” group are set to host a public forum on the spot at 1800 Columbia Road NW tomorrow to share information about PN Hoffman’s plan for it, 39-year-old organizer Vikram Surya Chiruvolu told Borderstan. The developer is looking to build a mixed-use building on the site and eliminate at least some of the open space currently there, angering some locals.

The gathering will come on the heels of Advisory Neighborhood Commission 1C’s votes against the developer’s proposal in May and Historic Preservation Review Board members’ vocal frustration about the plan last month. Members of both panels expressed concern about the aesthetics and size of the proposed building, which some of them said was too large for the property.

“After the recent ANC & HPRB victories opposing this development, we felt the time was right to hold space to bring together community and to each share what we know to this point,” Chiruvolu said in an email. “It’s not going to be fancy — just neighbors gathering and sharing and connecting in a public space.”

In a separate email Chiruvolu sent across the Adams Morgan neighborhood listserv yesterday, the local said he and his Save Our Plaza supporters want “this special corner of Adams Morgan to include an improved, green, inviting safe public space that remains public as it is now.”

As PN Hoffman has sought to redevelop the property, the developer has scaled back on the size of its planned building in an effort to address residents’ concerns. But in June, the HPRB declined to vote on PN Hoffman’s plan until the developer revises it again. The board must sign off on the developer’s proposal for construction to begin.

Chiruvolu, who has started calling the open space in front of the SunTrust building “Reparations Plaza,” said the creation of the spot resulted from a collaboration more than 40 years ago between progressive bankers and residents of Adams Morgan, where he said African Americans often had difficulties getting loans.

“We’re looking forward to continuing to share about the history of the space and call for community discussion about reasonable and respectful possibilities for its improvement,” said Chiruvolu, who has lived in Adams Morgan since 2006.