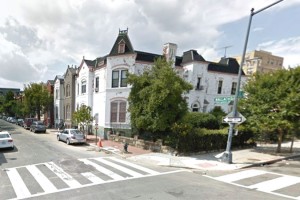 Thieves stole a Maryland man’s car and some of his other belongings after waking him up in his vehicle near the U Street corridor early this morning, police said.

The robbery happened on the 1300 block of Wallach Place NW about 2:45 a.m. The area is just east of the the Trader Joe’s on 14th Street NW.

The victim was dozing in his white Mercedes-Benz CLK350 when three men opened his front passenger-side door, according to authorities. Two of the new arrivals grabbed the victim’s iPhone and car keys before running away with their accomplice.

The man who was robbed then chased after two of the thieves. But he lost track of them and their accomplice.

The victim’s car was gone when he returned to where he parked it.

Police haven’t released detailed descriptions of the suspects. But the car has a Maryland license plate with “7AF6140” on it, according to authorities.