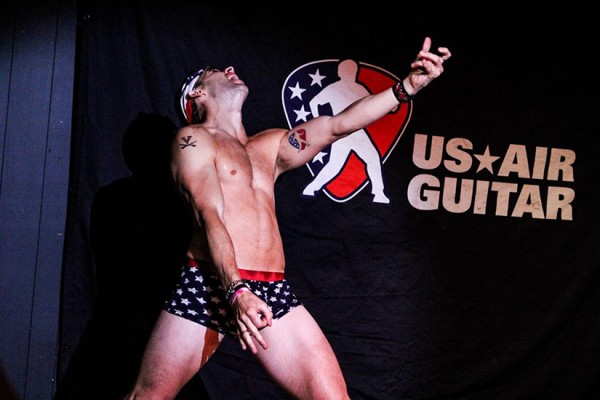 Performers in outrageous costumes are ready to rock out with invisible guitars at a popular music venue on 14th Street this weekend.

More than a dozen of the country’s best air guitarists are slated to gather at Black Cat (1811 14th St. NW) Saturday night to compete for the title of U.S Air Guitar’s 2016 D.C. Champion, according to the annual event’s organizers.

“[D.C. is] probably our biggest show of the year,” said Stroock, who describes the annual competition as “a combination of stand-up comedy and a rock concert.”

The winner of Saturday’s competition will then travel to Austin, Texas, for a shot at becoming the nation’s best, said former D.C. champion and U.S. Air Guitar host Doug “Thunder” Stroock.

Among the air guitar aficionados slated to perform in Saturday’s show are five-time D.C. champion Lance “The Shred” Kastan and two-time national champion “William Ocean,” who will also help judge the competitors.

“D.C. itself has come in second in the world or country in the last three years,” Stroock said. “This could be our year to win the whole thing.”

And there’s an added bonus for this year’s extravaganza, Stroock said. This year’s competition will be sponsored by Air Jamz, a company that promises to make a device “that turns air guitar into wear guitar and your moves into music.” Air Jamz will demo its new device during Saturday’s show, Stroock said.

more stories
Previous
POLL: What Name Should This Adams Morgan Plaza Have?
Next
Borderstan Blueprint (July 12-18)