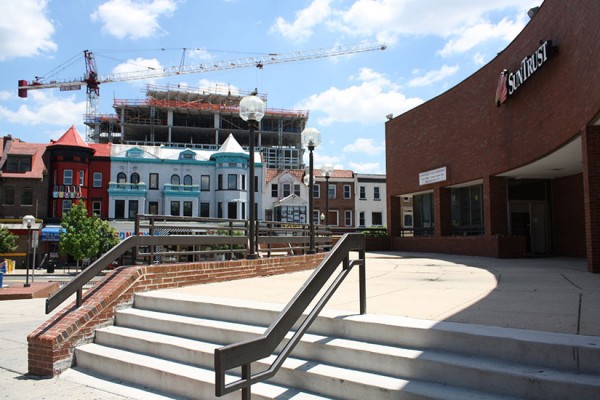 A plaza in the heart of Adams Morgan has found itself at the center of a battle over what’s best for the neighborhood.

On one side, PN Hoffman and some residents are pushing to take away at least some of the open space at 1800 Columbia Road NW to construct a mixed-use building. On the other side, some locals unhappy with the developer’s plan say they are fighting for “an improved, green, inviting safe public space that remains public as it is now.”

But what do you call the plaza? That issue is up for debate, too.

The spot, which doesn’t have an official name, is often referred to by PN Hoffman representatives, community leaders and other individuals as the “SunTrust plaza,” in reference to the bank on the property. We also have used that name for the site in our stories on Borderstan.

The “Save Our Plaza” group fighting against the developer has begun to call it “Reparations Plaza,” however. Vikram Surya Chiruvolu, a local behind the Save Our Plaza campaign, told us that the name came after he said he learned that progressive bankers and Adams Morgan residents collaborated in the 1970s to create the open space as part of “reparations” to local African Americans he said had difficulties getting loans.

We’ve also heard “Pigeon Plaza” used as a name for the place as well.

So, what name should the plaza have? You can weigh in through the poll and in the comments.