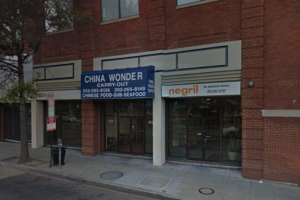 A hungry robber held up a Chinese restaurant near Howard University early this morning, according to D.C. Police.

A man entered the store and asked if he could get some chicken wings, according to a police report. When a China Wonder employee said the store was closed, the man pulled out a black handgun and demanded money from the register, authorities said.

The man took all the money from the behind the counter — about $200 — and ordered the store’s employees to get on the floor before he made his escape, police said.

Police posted a lookout for a man described as:

In other crime news, two thieves robbed and punched someone in Logan Circle yesterday afternoon.

The two thieves approached a man from behind and ripped his backpack off, causing its contents to spill onto the ground, authorities said. One of the thieves then punched the man in the face while the other swiped his wallet, according to police.

The thieves were last seen headed south on 12th St. NW. Police did not provide a description of either suspect.

In an unrelated crime later that night, two underaged thieves armed with a toy gun swiped money from a tip jar at a Dupont Circle pizzeria and threatened a man who tried to stop them.

According to a police report, two teens took about $43 from the pizza restaurant’s tip jar and fled on bicycles. When a bystander grabbed one of their bike tires in an effort to stop them, one of the teens yelled “give me back my bike or I’ll stab you.”

The man then took out his phone to call 911, but the teen slapped his arm and again threatened to stab him, according to authorities. The teen also lifted up his shirt to reveal the handle of a black toy gun tucked into his waistband, police said.

Police arrested the teen and charged him with assault with a dangerous weapon, felony threats, simple assault and theft. It was not immediately clear whether the other teen got away or simply wasn’t charged.