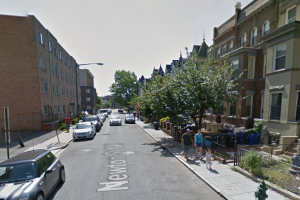 A group of thieves resorted to schoolyard bully tactics during a violent robbery in Columbia Heights last night.

A man was walking along Newton Street when he saw a group of people walking toward him, according to police. One of the people in the group then grabbed the man and put him in a headlock, authorities said. According to a police report, the thief asked the man, “whatcha got, whatcha got” while the others went through his pockets.

The thieves made away with $5 and an iPhone among other personal items, police said. Despite the submission hold, the man was not injured during the robbery.

Police said the thieves were last seen heading north on 14th St. NW but did not release a detailed description of the suspects.

Police are also on the lookout for a man connected to an attempted robbery and assault that happened near Howard University last month.

Authorities said two people flashed a gun at and assaulted someone on the 2700 block of Georgia Ave. NW on the evening of June 5. The victim was able to flee the scene the attempted robbery and sustained minor injuries, police said.

MPD is offering $1,000 to anyone who provides information that leads to the arrest and indictment of the suspects.