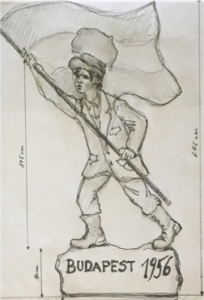 The Hungarian government plans to erect a statue in Dupont Circle to mark the 60th anniversary of the Hungarian Revolution.

The country’s officials in D.C. have commissioned the casting of a six-foot-tall bronze statue set to be temporarily displayed at the Kossuth Foundation (2001 Massachusetts Ave. NW) this October, according to Bob Cristiano, a representative for the Embassy of Hungary.

The statue is meant to remember those who struggled against the Soviet Union, Cristiano said.

“The survivors of the Hungarian Revolution will soon all be gone,” Cristiano said. “This is the last shot in doing something.”

The statue as designed will depict a boy waving a revolutionary flag, Cristiano said.

“The Hungarian flag at the time had a hole in it,” he explained. “They cut out the hammer and sickle.”

The statue is slated to be on display until the end of October, Cristiano said. Officials will then reinstall the statue at a later date once the Kossuth Foundation’s upcoming renovations are complete.