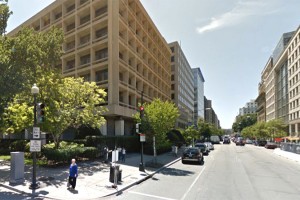 A thief put a gun to a man’s mouth before robbing him downtown over the weekend, police said.

The victim was sitting in his parked car just southeast of Farragut Square when someone opened the driver’s side door, authorities said.

“You know what time it is,” the person said, while putting a handgun to the man’s mouth, according to police.

The victim then gave the individual an iPhone, Timberland boots and some of his other belongings.

The robber fled soon after.

Two thieves pulled a gun on two men in a robbery in Kalorama this past weekend, too, police said.

The armed robbery occurred on the 2100 block of Wyoming Avenue NW about 2:45 a.m. Sunday.

The victims were walking just west of Connecticut Avenue NW when two men hopped out of a silver Pontiac Grand Prix that pulled up a short time before, authorities said.

“Gimme your sh-t,” one of the new arrivals said, while flashing a handgun, according to police.

One of the victims ran away soon after, leaving his walking partner behind.

The robbers then took the man’s iPhone and money, among other belongings.

A thief also punched and robbed a man on the U Street corridor over the weekend, police said.

The violent robbery happened on the 1300 block of U Street NW about 4:15 a.m. Saturday.

The victim was standing in front of the Jumbo Pizza in the area when someone hit him in the chest and snatched his iPhone, according to authorities. The robber then fled.

Authorities today also distributed a video of a young man wanted in an attack in Columbia Heights.