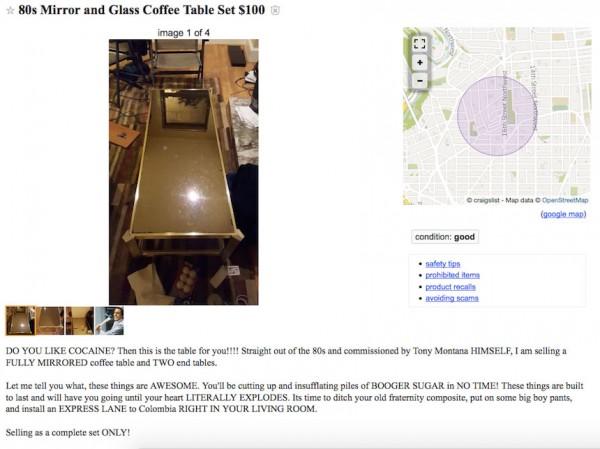 A mirrored coffee table “commissioned by Tony Montana himself” is for sale on the U Street corridor, cocaine not included.

The anonymous seller, who goes by the pseudonym, “Dirk Diggler,” is selling the 1980s-inspired piece with a purported “Scarface” connection for $100 on Craigslist. In his ad, which Borderstan spotted on Reddit today, Diggler says the furniture can serve as an “EXPRESS LANE to Colombia RIGHT IN YOUR LIVING ROOM.”

The buyer also gets matching end tables that have “seen some sh-t.”

“No telling what they did in the 80s, but if I were to guess, I was probably conceived within feet of these bad boys,” Diggler said. “These tables are the real deal, not some janky, Etsy-sourced pile of cheap materials held together with super glue.”

The seller, who says he’s a mergers and acquisitions attorney in his 30s, has received multiple offers. But he still is looking for the right buyer to come through.

To sweeten the deal, Diggler promises that for the right price “you can have whatever you want.”

The seller’s family acquired the furniture in 1983, following Diggler from Baltimore to U Street.

“They let people know, ‘Hey, I can party, but I also appreciate the finer things in life,'” Diggler said. “In terms of your attractiveness, it doubles, or even triples, around the opposite gender, and you’ll find yourself quickly becoming like a god amongst men.”

He hopes to sell the set to a college-aged person who is interested in owning retro-looking furniture.

“It is time to pass the torch to a younger, stronger and more able-bodied individual willing to use these tables for what they were meant for,” Diggler said.