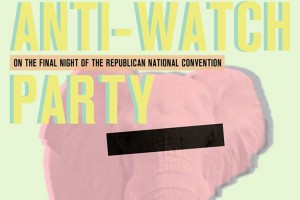 Locals looking to shake their fists and yell at a television during Donald Trump’s acceptance speech during tonight’s Republican National Convention will find refuge at a bar on U Street.

Sudhouse (1340 U St. NW) is slated to host an “anti-watch party” organized by the nonprofit Alliance for Justice Action Campaign tonight at 6:30 p.m.

Trump is expected to deliver a formal acceptance speech tonight to help close his party’s convention in Cleveland. Other conservative figures scheduled to speak during tonight’s program include Ivanka Trump, Reince Priebus and Jerry Falwell Jr.

To ring in the momentous occasion, tonight’s event will include “conservative code word bingo, drinks to ease the pain, surprise guests, music and a healthy dose of criticism,” according to an Eventbright page.