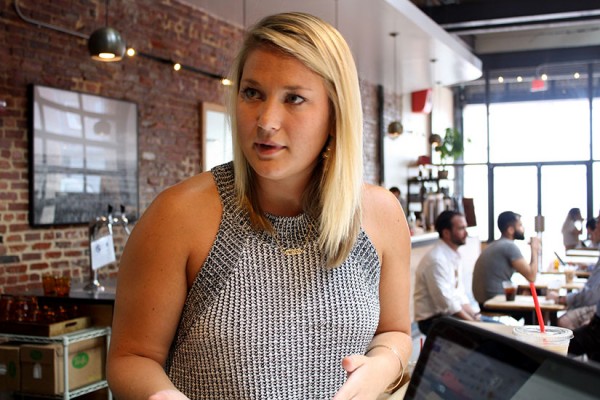 Borderstan periodically publishes profiles of locals — from longtime residents to newcomers, from government officials to ordinary folks. Know someone we should feature? Email us at [email protected].

U Street corridor resident Callie Harris doesn’t work in a cubicle, so you might have seen her around town during the day.

Her office could reside in a Starbucks in Dupont Circle one day, and then a local start-up coffee shop in Chinatown the next day. Earlier this week, she brought her work to Shaw’s Blagden Alley.

Amid the lightly playing music and the sound of baristas whipping up frappes, she waited patiently at La Colombe Coffee Roasters for her client, occasionally taking a sip from her iced coffee and peering at her laptop as she sat on a stool.

“If you would’ve told me five years ago that I would be a matchmaker, I would have laughed,” Harris said. “But now I can’t imagine doing anything else.”

Harris, 25, has a bachelor’s degree in journalism with a minor in entrepreneurship. But she decided to switch gears and take a job with matchmaking service Three Day Rule in January 2015.

The Los Angeles-based business, which bills itself as a “tech-enabled personalized matchmaking company,” aims to bring a “much more enjoyable, stress-free dating experience for both men and women,” according to its website.

In her online biography, Harris is described as someone who has “always had a passion for meeting new people” and is connected to a “robust network of tech professionals and political influencers in DC.”

“My whole life I’ve been matchmaking friends and colleagues,” she said. “I always felt that was my strength.”

When her client walked into the coffee shop, Harris immediately smiled at the tall, brunette woman and shook her hand warmly. They spoke easily with each other, as if they’d known each other for a long time.

At first, Harris simply asked background questions like, “What’s your birthday?” and “Where are you originally from?” in an effort to understand who her guest was.

Her client happened to be a 36-year-old D.C. pastry chef in search of that perfect date.

“I’ve tried them all,” the woman said. “I’m not finding anything. You [go] through hundreds and hundreds of people a day.”

The matchmaker then rattled off more questions, forcing her client to really think about who she was and what kind of a person she wanted in a relationship.

“What if someone’s been divorced?” Harris asked. “What about their education level . . . what about politics . . . religion?”

There were times when the matchmaker went with her gut and improvised. If she noticed an area where her client had a weakness, she pushed her to think about it more.

“So the deal breakers for you . . . can you think more about” them? Harris asked.

“You know, I’ve never thought about that,” the pastry chef said.

When the half-hour meeting was over, the matchmaker’s client breezed out of the room, looking pleased.

For the matchmaking help, the pastry chef and other Three Day Rule customers pay $4,500 for three months and $7,000 for six months.

“We’ve determined [success means] the person is satisfied after their contract,” Harris said.

But for Harris, her clients are more than a means to a paycheck.

“I really consider [my clients] all my friends,” Harris said. “Of course there’s hard days because . . . love’s not a science. It’s volatile [and] unpredictable.”

The hard days don’t outweigh the benefits for her, however.

“There’s nothing like getting a text [from a client] that says, ‘This is the best first date I’ve been on,'” Harris said. “[It’s] worth all the late nights and phone calls.”

more stories
Previous
Sleeper With Knife Vows to Kill Woman Who Woke Her Up on K St.
Next
What to Expect Around Town This Weekend (July 23-24)