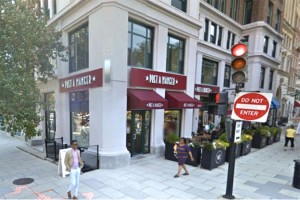 A woman sleeping outside a downtown eatery pulled a knife on another woman who disturbed her slumber yesterday morning, police said.

The sleeper woke up when a woman asked her to leave, authorities said.

“I’m going to kill you b-tch,” the woman who was sleeping said, while flashing a knife, according to police.

Cops arrested a woman in connection with the crime.

According to authorities, other crimes that occurred in Borderstan’s coverage area since yesterday morning include:

The FBI today also announced it will give a reward of up to $10,000 for information that helps the agency get back a Glock-22 handgun, Rock River Arms rifle and other equipment someone stole from an agent’s vehicle near H and 7th streets NE on July 10, according to a news release.

Police today released surveillance footage of a man and a car wanted in connection with the burglary of an unidentified business near Howard University, too.

The crime occurred on the 2800 block of Georgia Avenue NW about 5 a.m. June 22, according to authorities.

The video shows a man inside a business and someone driving a car outside.

more stories
Previous
Borderstan Building Permit Roundup (July 15-21)
Next
Meet a Matchmaker: What It’s Like to Play Cupid in Shaw for a Living