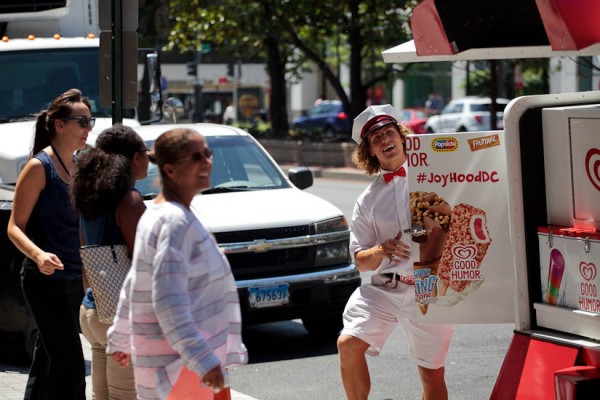 The Good Humor ice cream truck will dole out free ice cream bars, cones and popsicles to all who arrive tomorrow afternoon.

Gays Against Guns D.C. is speaking up about the and senseless murders due to gun violence. The organization “calls on lawmakers to ban on assault weapons and sensible gun regulation.”

Ben Evans, co founder and head brewer of Hellbender Brewery is hosting a class at The Big Board. $30 ticket gets attendees samples, a full beer and snacks.

Common Good City Farm will teach locals how to cook with some of summer’s fruits and vegetables grown at the farm.

D.C. Women in Politics and Young Dems is hosting a watch party on the final night of the DNC. The watch party is set to take over the screens at Songbyrd and will feature a cash bar with a Hillary Clinton inspired cocktail.

The Japanese Information & Culture Center will host a screening of “Mobile Suit Gundam,” the first movie in the trilogy about a boy who finds himself in command of a powerful mechanized suit of armor — and right in the middle of a war in space.

Residents of Mount Pleasant compiled a book of poems. Now, it’s time to let the world hear them. This event will celebrate the creation of the book and the neighborhood’s creativity.

Duplex Diner is celebrating its 18th anniversary with music and a competition where guests will sample and vote on a new drink to add to the menu.

Local rockers will take the stage to perform parodies of famed songs.

The Logan Circle community is hosting a neighborhood party filled with food, music and carnival games.

Attendees can spend their Sunday catching tiny monsters at the Washington Monument.

Yoga in NoMa is inviting all to pack peanut butter and jelly sandwiches with them. The sandwiches will be distributed at local nonprofit So Others Might Eat.

Ventnor Sports Cafe is hosting a screening of Sharknado 4, the latest film in the gripping shark/tornado movie series.

Chefs Jesse Miller and Stef Tarnowsky have teamed up to create a vegetarian and vegan friendly menu. This celebration will kick off the new “Meatless Monday” menu that will be offered weekly.