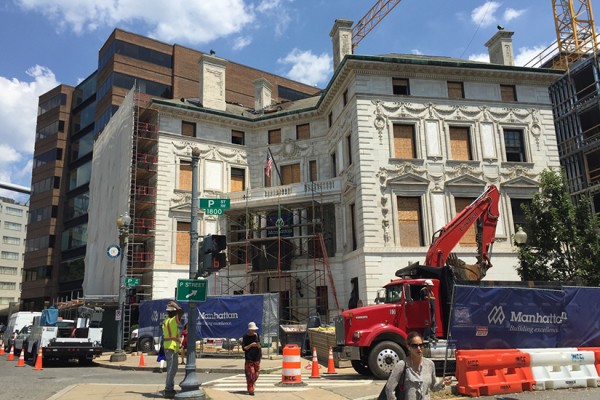 Residents of a micro-unit apartment building under construction in Dupont Circle won’t have to go outside to visit a bar with fast-casual food, if a developer gets its way, recently released paperwork filed with the D.C. government shows.

The redeveloped Patterson Mansion at 15 Dupont Circle NW is slated to have interior access between its 92 fully furnished tiny apartments and the drinking and eating area, according to a liquor license application Borderstan obtained last week.

In addition to booze, the bar space is set to have “continental breakfast, fast casual food service and lite fair,” as well as “speakers, chef presentations, lectures, exhibits, etc. for residents,” the paperwork says. The bar is slated to provide seats for nearly 50 people.

Advisory Neighborhood Commission 2B and the D.C. Alcoholic Beverage Control Board are expected to consider the liquor license application in the coming months.

A representative of the building’s developer, SB-Urban, wasn’t immediately available to comment.

Built in 1903 for Chicago Tribune editor Robert Patterson and most recently used by a women’s club, the Patterson Mansion sold in 2014 for $20 million to SB-Urban.

Construction, which began last year, is scheduled to wrap up this year.