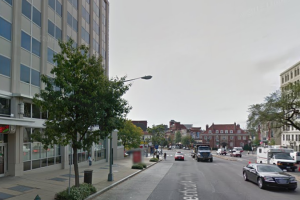 (Updated at 12:35 p.m.) Two thieves robbed a woman at gunpoint in Dupont early yesterday morning, according to D.C. Police.

The robbery happened on the 1800 block of Connecticut Ave. NW around 3:10 a.m. yesterday morning, authorities said.

A woman was walking along Connecticut Avenue when she was approached from behind by two robbers armed with a black handgun, police said.

According to a police report, one of the robbers grabbed the woman’s arms and told her to “gimme your stuff.”

Police said the thieves ran off with the woman’s purse, which contained hundreds of dollars in cash and several other personal items.

Authorities did not provide a lookout for the suspected robbers.

A would-be robber beat up a man in Columbia Heights yesterday evening, too, police said.

According to authorities, someone punched a man in the face, causing him to fall down. The assailant then kicked the man once and ran away without taking any of his property, police said.

The victim of the assault suffered a small cut above his right eye and was taken to the hospital, according to police.

Additionally, an argument led someone to pull out a gun and shoot at someone else in Shaw early yesterday morning, police said.

Police said two people who did not know one another got into an argument inside of a Shaw nightclub around 2:45 a.m. yesterday. The argument then continued outside on the 800 block of T St. NW, according to police.

The discussion was apparently heated enough to prompt one person to pull out a handgun and fire two shots at the other, according to police. The bullets did not hit anything, authorities said.

Police did not provide a lookout for the alleged shooter.