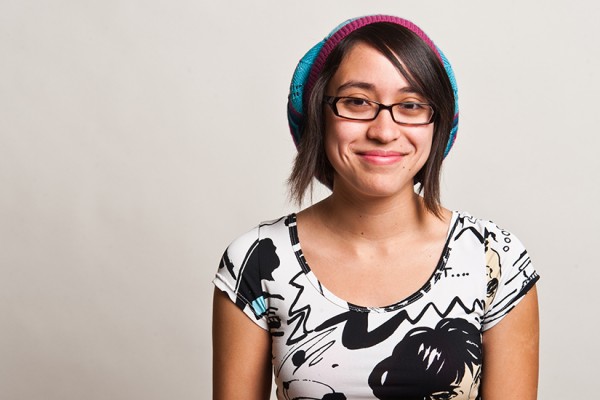 I first met Alyssa Cowan before a show at Dr. Clock’s Nowhere Bar in Adams Morgan.

She and another comedian I interviewed, Ahmed Vallejos, are the driving forces behind Laugh Owens Laugh, the production company that puts on great shows like “Virgin Material” and the upcoming “Meryl Streep Stories.” She also helped produce the 202 Comedy Festival that took place earlier this spring.

Alyssa and I met up again and had a conversation on the origins of Laugh Owens Laugh. But we started by talking about WWE Battleground, which took place at the Verizon Center last Sunday.

Borderstan: Tell me about Battleground.

Alyssa Cowan: It’s a pay-per-view. Basically, every week, [the wrestlers] have TV episodes that are leading up to setting up these big story-lines that’ll transpire during the pay-per-view, so that’s when titles change hands. That’s when fancy stuff happens. That’s when people go crazy and get put through tables.

That’s what I associate with wrestling, like the chairs and tables, getting to the edge of the ring and slamming their body down.

Yep, all that stuff… All that cool stuff.

So, they’re going to bring it; every wrestler is going to come bringing every trick they have up their sleeve and just unleash it wildly.

This is when they go balls to the wall, like when this is go bananas. And it’s happening in D.C., it’s very exciting.

How many wrestlers are there?

How long does that go for?

Wowza. Do you guys get an intermission?

No, but they always put a crappy match in the middle, so you’re like alright, now’s my time to buy funnel cake.

I wanted to ask you about Laugh Owens Laugh. Just how it started and everything. I love the shows that you put on.

We love doing them and we love making them exist. The reason why we wanted to do them in the first place is because these were shows we wish existed and we can try to put them on ourselves in an appropriate venue. It just means that we can watch them, we can see them and we know they have opportunities to grow. It started mostly because I was somewhat gifted at open mic, so I was running it as an open mic for a while, but it was on a Wednesday and in D.C. comedy, there is so much going on on Wednesday that’s an open mic.

So, it’s not exactly something that the scene needs, like no one’s looking for stage time on a Wednesday – you can usually find it.

I ran an open mic in Reno for a couple of years and we used to do a bunch of challenges and gimmicks, like we would do something different every week. And it used to make it so much more fun. The community’s so small there, like, there are hundreds and hundreds of comics in D.C., whereas in Reno, there were maybe 30 or 40. Adding a different challenge where you had to do something different made it interesting for us to actually see each other and like each other.

So, when I had the open mic, it wasn’t really working very well as an open mic and I remember there was a concept show that Ahmed wanted to put on and I was like “Oh I’ll just ask if we can loan you the venue for that show.” And it was the Switcheroo.

Oh yeah, I went to that.

I’m glad, that one is a hoot. That one’s so fun. Especially if you like watching comics struggle, which is very funny. I feel like it’s very funny to everyone and it’s funny to be a comic struggling on stage. Not because you did a bad job writing, but because you’re in a situation that’s so difficult. I feel like people empathize with you, so they’re not angry that you’re not funny. They’re understanding about it.

When we started loaning the venue for shows we wanted to, we switched over and were like, we should just be doing this because no one’s asking for another Wednesday open mic. So, that’s kind of how it evolved. It’s cool to have a venue where we can try whatever we want and we’ve been fortunate enough to where people seem to be interested in the stuff that’s going on.

The venue that we’re at now is amazing. The guy that runs it is super cool and I think these are shows that he’d want to see. It’s awesome to have that venue support.

Yeah, definitely. How did the name Laugh Owens Laugh happen?

When Ahmed and I had one of the previous names, we had this chicken guy. This rooster guy that I made that we just really liked. He was just this rooster wearing a suit and we didn’t want to get rid of him. We just thought he looked funny and classy, so we were trying to think of names where we could keep him and the reason we thought of Laugh Owens Laugh is because there’s a wrestler right now named Kevin Owens and one of the chants people yell at him is “Fight, Owens, Fight!” I think one of us made a passing joke of calling it “Laugh Owens Laugh” and then having the rooster be Owens and we were just like, that’s great. We’re going to go with it. We like it.

Mostly because the acronym goes to LOL, which is perfect for comedy. It just came from us ’cause we’re dumb wrestling fans.

Information on Alyssa Cowan and her upcoming shows/festivals, including The Summer Camp Show at Wonderland Ballroom in Columbia Heights, can be found on her website. To find out more about Laugh Owens Laugh shows, visit the group’s Facebook page.

This interview has been edited for length and clarity; photo courtesy of Alyssa Cowan.