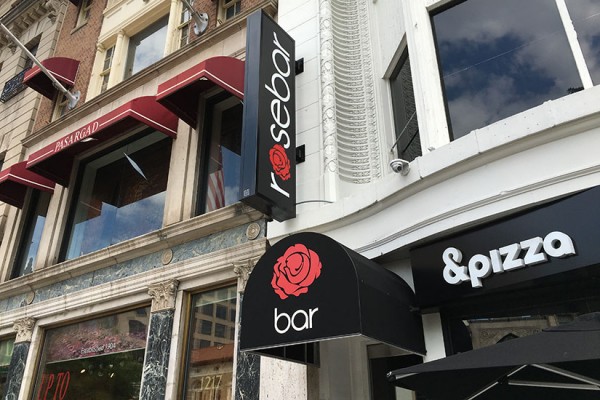 The security workers declined medical treatment. But the attacker’s first victim was brought to a local hospital.

Police arrested the suspect. But the individual’s identity wasn’t clear.

A Rosebar representative couldn’t immediately be reached for comment.

A man also was beaten up in a Park View restaurant, carried outside and punched and kicked some more this past weekend, police said.

The victim was inside the eatery when a man started making threatening gestures toward him, according to authorities. The threatening man then elbowed the victim on the back of his head.

A group of nine other people started to punch and kick the victim soon after. During the melee, the victim also was hit with a bottle and a brick.

The attackers then brought the victim outside and continued their assault. The victim eventually was able to get up and run.

He wasn’t left alone, however.

The victim’s first assailant followed him to the Manny & Olga’s at 3624 Georgia Ave. NW, according to authorities. The attacker then broke the glass to the door of the pizza shop after a worker there locked the front door with the victim inside.

Police arrived soon after and arrested the suspect. But the individual’s identity wasn’t clear.

Authorities haven’t released descriptions of the other people wanted in the attack.

A La Morenita manager couldn’t immediately be reached for comment. A Manny & Olga’s manager told Borderstan her workers were fine and someone would fix the door today.

A man ordered a woman to give him oral sex at gunpoint in a Columbia Heights alley over the weekend, too, police said.

The victim was in an alley in the area when the man went up to her, according to authorities. He then flashed a handgun and demanded oral sex.

If she didn’t comply, the man said he would “do other things to her,” police said in a report.

It wasn’t clear if the woman was able to get away.

Authorities haven’t released a detailed description of the suspect.

more stories
Previous
Police Looking for Vandals Who Spray Painted Cars Near H Street
Next
Pet of the Week: Rugby