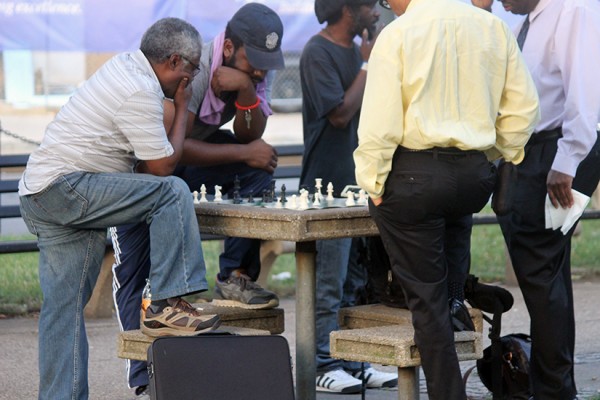 Punk History Uncovered in Adams Morgan — When workers tore down drywall inside of a townhouse at 2318 18th St. NW, they discovered a treasure trove of local music history: a wall covered in graffiti from D.C. punk bands. The townhouse, once an artist co-op, served as home to members of bands like Bad Brains, Trenchmouth and Tru Fax & the Insaniacs. [Washington Post]

There’s Always Money in Lincoln Restaurant — Lincoln Restaurant (1110 Vermont Ave. NW) will close in September to remodel its dining room. Included in the work is the arduous task of removing nearly a million pennies from the restaurant’s floor. Though many of the pennies have deteriorated over the years, Lincoln owner  Alan Popovsky says he hopes to reclaim enough to bank a few thousand dollars. [Washingtonian]

Smoked Salmon in a Vending Machine? —  Buy smoked salmon and other oddities in vending machines at Maketto, The Pug and Union Market. The machines are the work of Alex Hastings and Mike Galyen, the duo behind Guerilla Vending. [WTOP]

See Inside Luxury Clothing Store in CityCenterDC — Take a peek inside Moncler, the new French clothing store that opened recently at at 913 Palmer Alley NW. [Washingtonian]