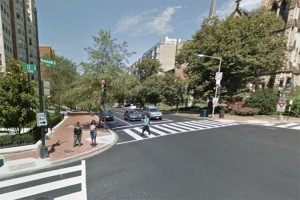 A man shot in Southeast D.C. early this morning went to the hospital after cops found him near Thomas Circle NW, according to authorities.

The shooting happened on the 1800 block of Stanton Terrace SE about 12:30 a.m. Police officers stopped a car with the victim on the 1200 block of Massachusetts Avenue NW about 1:15 a.m.

The man was conscious when cops discovered him, police said.