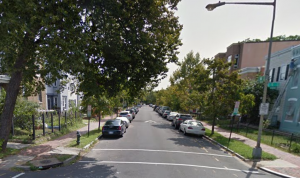 (Updated at 2:41 p.m. with details about a third victim) Someone shot and injured two men and one woman near Gallaudet University in broad daylight this afternoon, D.C. police said.

The shooting happened on the 500 block of M St. NE just after noon, according to police.

The three victims were all conscious after the shooting, authorities said.

According to a D.C. Alert, police are on the lookout for a man described as: