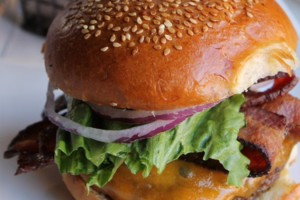 Only one restaurant in the 14th Street corridor makes the best burgers, and this weekend locals can put it to a vote.

Chefs from Saint-Ex, Matchbox and Garden District are slated to compete against each other to determine which which restaurant can claim the “burger bragging rights.”

“We have this awesome patio and we just wanted to do something that was a bit focused on the neighborhood,” said Saint-Ex general manager Zeina Badran. “One of the owners of Saint-Ex came up with the idea. It kind of just sprung from there.”

Tickets are $15 at the door and include three burgers and a starter beer from 3 Stars Brewing Company. Attendees can also buy additional burgers and beers.

Badran said she expects about 200 people to show up for the cooking competition. The only thing that will stop customers from getting in on the event is if Cafe Saint-Ex fills up and runs out of room for people, she added.

Members of the public will vote on their favorite burger at the end of the event. Badran said she wasn’t sure which restaurant is likely to win the contest because each restaurant has “been in the neighborhood for a long time” and are “known for great burgers.”

The winning restaurant will donate a portion of the event’s proceeds to a charity of its choosing. And in the end, Badran said, “it might just come down to which charity locals want to pick.”