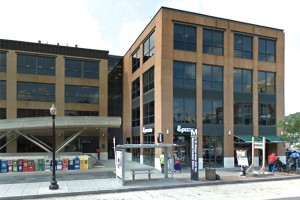 A man made a weapon out of a post used to hold up rope for crowd control near the U Street Metro station over the weekend, police said.

The assault with a stanchion happened on the 1200 block of U Street NW about 3:45 a.m. Sunday.

The man was arguing with another man outside of the &pizza on the block when the attacker punched him and then hit the victim over the head with the pole, according to authorities.

The assailant ran away soon after.

Police arrested a man in connection with the attack. But his identity wasn’t immediately clear.

The condition of the victim also wasn’t clear.

Someone also beat a man with the handle of an ax on North Capitol Street NE on Friday, police said.

The attack occurred on the 1600 block of North Capitol Street NE just north of Florida Avenue about 6 p.m. Friday.

The victim was having a dispute with his assailant over something that fell to the ground, according to authorities. The attacker then picked up an ax, using its wood handle to hit the victim repeatedly in his back.

A man was robbed at gunpoint in Columbia Heights last night, too, according to authorities.

The armed robbery happened on the 1300 block of Otis Place NW about 10 p.m. Sunday.

The victim was in the area when a man came up to him from behind and flashed a gun, police said.

Where is your money? Give it to me,” the man with the gun said, according to authorities.

The thief fled with the man’s backpack soon after.

Police sent out this tweet with a suspect description after the crime:

According to authorities, other crime reported in the Borderstan coverage area since Friday evening included: