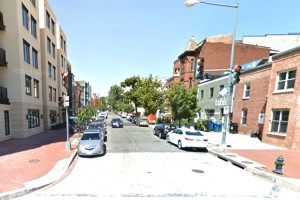 (Updated at 10:35 a.m. Wednesday) A woman stabbed a man in Shaw after they boxed with each other Tuesday night, according to authorities.

The stabbing happened on the 900 block of N Street NW about 9:30 p.m. The area is just west of the Walter E. Washington Convention Center.

The victim and his assailant were “playing” when they boxed, according to authorities. But the boxers eventually became “disrespectful” to one another, escalating the fight, police said.

At some point, the woman pulled out a knife and stabbed the victim in his stomach.

Police put out this tweet with a suspect description: