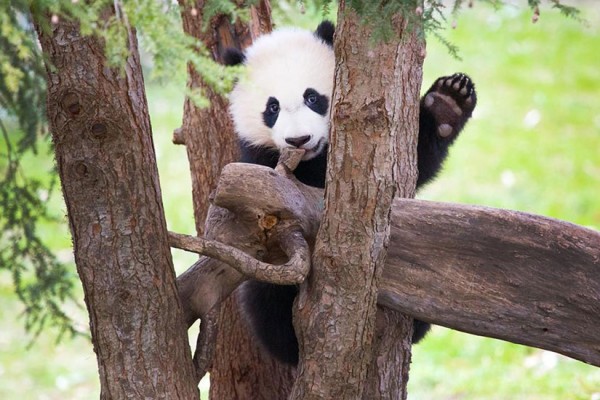 The National Zoo’s newest giant panda is set to have a first birthday party this weekend, and you’re invited.

The zoo is scheduled to give birthday boy Bei Bei and his family “panda-friendly frozen cakes” in their exhibit at 1 p.m. Saturday, according to a news release. His mom, Mei Xiang; his dad, Tian Tian; and his sister, Bao Bao, are expected to join the cub in eating the treats.

For humans, the zoo will have a limited supply of a cold, spicy Chinese dish called Dan Dan noodles available for free beginning at 11 a.m.

Bei Bei also is slated to participate in a Zhuazhou ceremony, a Chinese tradition for first birthday celebrations.

The zoo adds in its news release:

In a traditional ceremony, several symbolic objects are placed in front of the baby. The object that the baby chooses foretells something about his or her future. Bei Bei will have three banners with painted symbols placed in his yard. He or his mother Mei Xiang (may-SHONG) will choose one.

But only Friends of the National Zoo members will get to see the ritual in person. Everyone else can watch the rite on Facebook at 8 a.m. The zoo’s Facebook page also will have live video of the pandas with the birthday cakes.