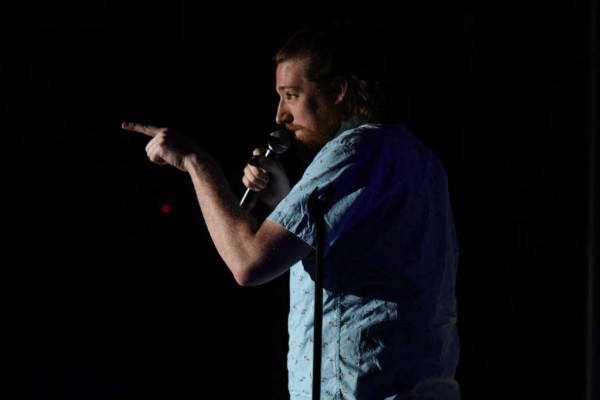 I think the first time I saw Dylan Meyer perform was at Shenanigan’s during its Monday night open mic, and I’ve since spotted him at various shows around town. I always noticed his jovial nature and how he can be funny without any effort. I chatted with him right before he was on the panel for “Specific Ignorance,” a comedy game show started by fellow D.C. comic Chris Milner. It’s held at Bier Baron every third Thursday of the month.

Borderstan: Are you excited about doing “Specific Ignorance?”

Dylan Meyer: Very excited. They just released a spec trailer online for this show that they’re going to shop to various venues and clubs and television stations. So yeah, it’s very exciting. It’s certainly a unique show, unlike your average “go-up-and-tell-jokes” type of thing. I don’t know how I’m going to be funny, yet. I’ll have to just figure that out whenever I get the questions, so it takes a lot of the pressure off. Usually before the show, you’re looking at your jokes. They’re already written, and you’re just hoping that they work. But in this setting, I don’t need to worry about that.

Do you have anything prepared?

No, people will ask us questions from the audience, and we’ll just have to answer them. I have no idea what they’re going to ask me. Obviously, they chose comedians so they’re hoping that we’re not just experts that can give a fact and that’s it. We’re supposed to make it an enjoyable process.

Yeah, except you don’t have any cue cards or anything like that. So who knows? It could be terrible; I could be completely awful up there. But that’s the other great part of it — I’ll never have to do it again. So at worst, I’ll get to walk away from it and not have to relive that experience.

Have you done it before?

I haven’t, no. There’s so many great comics in D.C., that you get such a different experience every time you’re going to any show. Even seeing the same comic twice, you’re going to see a completely different way that they play off each other and play off the crowd. It makes it fun. It makes it very easy for me to not get bored with something that I do every night. It’s convenient that I’m surrounded by funny people.

Yeah, and it’s good that you know the audience is going to have fun, instead of you know, hoping they do. ‘Cause when they have fun, they’ll come back, and they’ll tell their friends. It’s great for everybody. There are more places to go and get better at being funny. It’s a self-fulfilling prophecy, kind of.

How long have you been doing comedy?

I started just over five years ago in a seafood restaurant in Rockville, Maryland, called The Potomac Grill.

Is it still there?

No, it has since closed. They closed only six months after they stopped doing comedy there. Maybe comedy was the thing that was holding that thing together. It was hosted by Rob Maher. I didn’t know [him] at the time, but he’s a very experienced comic. He’s done a lot of very good things around here, elsewhere. He’s performed for the troops in the Middle East and done all of this great stuff. He’ll actually be on Kevin Hart’s show coming out this fall, filmed in D.C.

I didn’t know at the time, but I showed up, and I was actually very fortunate to have someone who knew what they were doing, not necessarily being my mentor, but being the guy that I looked up to. [He] wasn’t some other idiot just like me who had been doing it a month longer. So, I learned a lot of good lessons early. But, it was also very comfortable. It was 10 minutes from my house. Going outside of that was much more work than just doing that every once in a while.

I have to tell you that I don’t know what the proper etiquette is for an audience member.

OK, so, the general rule is “speak when spoken to.” So, there are questions that are very obviously general and the whole crowd can react to it without actually saying any words, Like “who here is on Facebook?” and people can clap or cheer. Or they’ll ask someone in particular something specific — “Ma’am are you married?” Sure, you can answer that. The magic trick of a stand-up comic is to try and make it look like you’re just thinking of it, spur of the moment. We’re trying to make it look easy. That’s the goal, right? To some people, I guess the trick works a little too well, and they think it is easy, and so they think, “Oh, I can do that,” and just stand up and yell something.

What shows do you have coming up?

Next Saturday, the 27th, is “Fale University.” I’m very excited for that. Wednesday, September 21st, I’m doing a show called “Impressionist Art” that Ahmed [Vallejos] and Alyssa [Cowan] set up. The premise for that is that there will be some comics that I select that will go up and do a short set, and I’ll go on right after them and do an impression of them. Basically, I’ll be meme-ing them. Sunday, October 9th,  is the DC Improv Kumite Tournament of Champions, this eight-person tournament they’ve had several times, and they crown a winner of it. It’s head-to-head, [each comic] does five minutes, and the crowd picks a winner. They’re having the eight people that have won doing a winners’ bracket, and I’m hosting it.

In addition to the shows mentioned during the interview, you can find Meyer performing at various open mics around the area, including Monday nights at Shenanigan’s in Adams Morgan and at The Big Hunt in Dupont Circle, several nights of the week. (See www.undergroundcomedydc.com for info on when those open mics are). You can also follow Dylan on Twitter @Your_Boy_Dylan.

This interview has been edited for length and clarity.