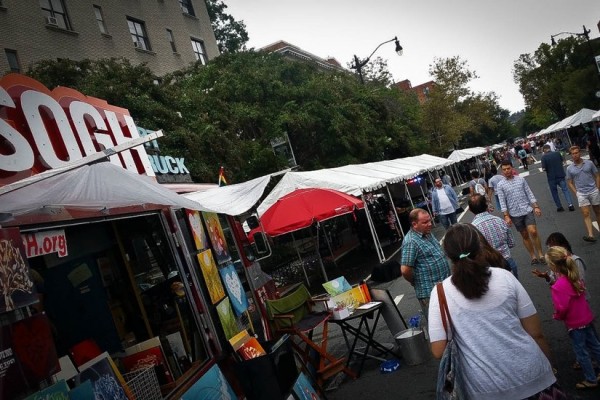 Attendees can watch four locally made movies from members of District film collective The Lookout D.C.

Exhibitors will screen films from the 2015 D.C. Adventure Film Festival. The event is free, and attendees can bring along chairs, blankets and coolers.

A crowd of total strangers will meet to sing pop sings and drown their sorrows. Each month, the group belts out tunes related to a particular theme. This month’s theme is “questions and commands,” meaning the songs must have a question or a command in the title.

The bar will host a happy hour from the Louisiana State Society of Washington, D.C. to raise money for the victims of the recent flooding disaster in south Louisiana.

Teachers at K-12 schools will be able to explore the museum’s newest exhibit, “Icebergs,” for free.

Locals will gather for a rousing session of Quizzo, a trivia game popularized in Philly and D.C. bars in the ’90s.

The H Street bar will host a screening of The Big Lebowski and sell The Dude’s favorite drink, white russians, at a discount.

The executive director of national nonprofit Food Recovery Network will lead attendees through basic food preservation and canning techniques. The event is free and hosted by D.C.’s Department of Parks and Recreation.

Fans of RuPaul’s Drag Race are slated to gather around glowing televisions at this Logan Circle gay bar and cheer on their favorite queens from seasons past.

District socialists will meet to talk about the future of the left after the end of Bernie Sanders’ presidential campaign.

Learn how to make the fermented beverage in a variety of flavors. All attendees will leave with a starter to make their own kombucha at home.

With Love DC, the organization known for organizing the silent disco in Dupont Circle, is hosting yet another quiet dance party.

The party will have music from Ludacris, Destiny’s Child, Jay-Z, Outkast and Shakira, courtesy of DJs Will Eastman and Brian Billion.

Locals can bring food, beverages, blankets and chairs to this free screening of “Coming to America” in Bloomingdale’s Crispus Attucks Park.

The annual 17th Street festival will include a “few new things this year,” like a costumed dog parade, a mariachi band and a Chinese dragon dancer, said Bill McLeod, executive director of Historic Dupont Circle Main Streets, the organization putting on this year’s event.

Shaw business owners, workers and residents can join this neighborhood group photo of up to 150 people. The photo will then be printed as a building-sized banner and displayed publicly in Shaw during an upcoming arts festival, organizers said.

The retailer on 14th Street will host a dog-treat bar with “a variety of treats to all four-legged friends.” All who visit the store that day will also receive complimentary red, white and blue dog bandanas.

Locals are set to have the chance to rescue space animals, fight zombies and go on other quests for free during a gathering of D.C. video game developers and players downtown this month.

This year’s fair will bring with it all the usual attractions of a state fair: heaviest vegetable contests, food and music, live animals. But the fair will also have a mumbo sauce cook-off, eating contests and a “best bud” marijuana growing contest.

This writing workshop will give attendees the opportunity to talk about who they’d like to see as the next president and what they’d like that person to accomplish in office.