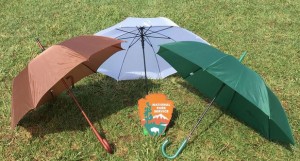 (Updated at 9 a.m. Wednesday) The National Park Service is looking for more than 1,000 helpers to bring its arrowhead logo to life near the Washington Monument this week.

The agency is planning to create what it calls the “world’s largest National Park Service emblem” with participants holding brown, green and white umbrellas on the west side of the monument Thursday morning, according to a Facebook event post.

The first 1,000 people to arrive for the event between 8 a.m. and 9 a.m. will get a free T-shirt and an umbrella to celebrate the “Centennial Living Arrowhead,” which is intended to help commemorate the 100th anniversary of the agency’s founding in 1916. Assembly of the umbrella panorama is scheduled to begin at 9 a.m.

Before the event is slated to end at 11 a.m., the agency will have an aerial photograph of the display taken, an NPS news release says. The photo then will go up on the National Park Service’s website and social media pages.